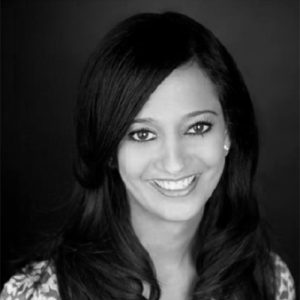 Jalak Jobanputra is Founding Partner of Future\Perfect Ventures, an early stage venture capital fund in NYC focused on next generation technology such as blockchain and machine learning. FPV’s portfolio includes Abra, Blockstream, Bitpesa, FuseMachines, Everledger and Blockchain. Jalak was awarded Institutional Investor’s Most Powerful Fintech Dealmakers from 2016-2018. In May 2018, Jobanputra was awarded Microsoft’s VC Trailblazer Award for “her early and bold” investments in the sector. She has been listed as a 100 Most Influential Fintech Leader of 2016 and 2017 based on her investment strategy at FPV. In 2017, she was cited as a “Top 5 Investor Powering the Blockchain Boom” and Crunchbase noted FPV as one of the top VC funds in blockchain “before it was cool”. Since founding the firm, she has spoken on blockchain technology, IoT, and artificial intelligence at many global conferences, including the Milken Global Institute, Dutch Development Bank/FMO Annual Meeting, and The Economist Buttonwood Gathering. She also founded Collective Future, an organization to foster diversity and inclusion in the nascent blockchain sector. FPV’s incubator FPV Labs was selected by the NYC Economic Development Corporation in January 2019 to operate the NYC Blockchain Center, a unique private-public partnership formed to serve as an access point to the growing blockchain ecosystem and collaborate with elected officials on policy initiatives. In February 2019, FPV was selected as NYCEDC’s co-investment partner in their WE Venture Program to invest in underrepresented founders.

Jobanputra is also active in supporting education reform and social entrepreneurship. In April 2019, Jalak joined the Advisory Board of women.nyc. Jobanputra was selected as an Outstanding 50 Asian American in Business in 2010 by the Asian American Development Center.